Road Test No.1: In The Name of Science

Is there anything more soul-destroyingthan looking in the mirror halfway through your day, and seeing ashiny, raccoon-eyed, spotty rendition of what you thought was yourwell put-together self? You’re sure that you left the houselooking like a million bucks, seamless-looking skin, blusher just theright amount of rosiness, lips all plump and ready to take on yourfirst latte of the morning. You’ve been running all over the place,having professional conversations with other humans all day long, andnow you can’t help but wonder if they were staring at that shadowof a shadow of a former zit on your chin peeking through your fadingfoundation, or wishing they had a pair of Ray-Bans for the blindingoil slick that is your T-zone. Yeah, me too.

And so, in the spirit of solidaritywith Real Gals throughout the globe who work long hours, run aroundlike maniacs all day long, or just cant be bothered to touch-up theirfaces fifty thousand times a day, the Highland Fashionista hasdecided to dedicate a running piece to us all. Readers, I present toyou:

Road Test; the Highland Fashionistatrials a bunch of cosmetic products so that you don’t have to. 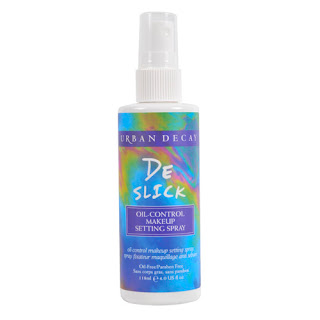 I have had this product in my cabinetfor a while. And I had wanted to buy it for a lot longer than that,but hadn’t. Largely, because it costs $29.00 at Sephora. Ithought that was a lot to spend on something that really, reminds mea lot of pointing a bottle of Windex at your face and pulling thetrigger. But in the name of Beauty, I persevered.

At this time theHighland Fashionista would like to point out that, despite a verylengthy and expensive stint in graduate school, the only words sherecognizes here are aloe,leaf,and juice. Okay, and maybe phosphate,but in my professional realm, we generally save that ingredient foran altogether different purpose.

So. There is avery specific way that one is supposed to use this product, and for awhile, when I first got it, naturallyI didn’t read the directions. Yes, something that is as simple as aspray bottle comes with directions, as it turns out. But I and myexpensive graduate education promptly apparently felt that we wereabove said directions and I took to just spritzing my face with theproduct after I had applied my makeup (as the magazines have alwaystold us to do with those mineral water spritzers). Apparently thatis totally wrong, and perhaps explains why it didn’t seem to make ablind bit of difference in the appearance of my makeup.

So apparently,the correctway to use this product is as follows; before putting on your makeup,hold bottle 4-8 inches away from your face and spray 2-4 times. Applymakeup, then do it again to set.

And with thoseexplicit instructions, begins the ultimate test of any makeup productever made. The twelve-hour shift.

After showering,I put on my usual antioxidant serum and let it soak in. I also use alittle extra moisturizer under my eyes. Spritzed, put on makeup,spritzed again. And behold.

If you’llexcuse the shiny moon-face closeup, this is the end product. Thefirst-out-the-door, no-makeup-makeup look (kudos Bobbi Brown). Wethair and ponytail elastic not included.


I do confess, however, to doing a wee bit of a touchup at eight hours, after this photo was taken. Not anything drastic, just a wee bit of powder and some gloss. Anyway, This has now essentially lasted a workday for most normal people who work more civilized hours. Also, I did notice at this point,  some cakey bits under my eyes, and had to dab them with a bit of water to get them to blend.


So, at the end of a very long day, is Urban Decay De Slick a pass or fail. Pass. Mostly.

I do think the product works, but I think due diligence must be paid in order to avoid the eye area when you apply it initially, lest you end up with cakey zombie-eyes later in the afternoon. It is perfect if you are going to an event, or know that you are going to be running around shopping or the like for the afternoon. Will I use it every day? Nope. And most likely, nor will you. I just don't have it in me to add any more permanent steps to my routine.  But I will reach for it as and when I need it.

Until next time,
HF