My favourite moments of fashion inspiration are the ones that drive you towards things that are already there. This week, during one of my many daily browses of the internet, I found some inspiration that was waiting for me, lurking in the tall grasses of the Austrailian designer Dion Lee's Resort 2013 collection. 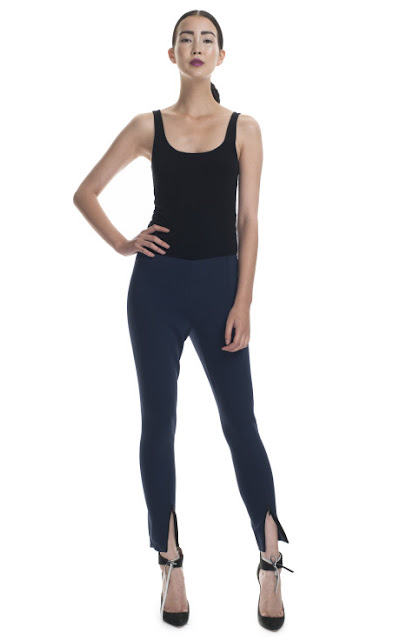 When something fashion-related makes me pause and pay attention for a minute, as this did, I know that I have found something that is essentially me, and I set about deconstructing it. Granted, this particular look is not exactly statement dressing, but then sometimes the statement that you wish to make is that you want to look quietly chic, and nothing more.

There is something about the simplicity of the lines and the modern mix of navy and black that struck a chord with me. It struck me to the point where I decided to try to suck out its very essence and claim it for my own. To steal its mojo, as Austin Powers would say.  With apologies to Dion Lee, I admit that I did not buy the complete looks. Or any part of them, actually. If I‘m lucky, I may secure a few well thought-out, keep-forever runway pieces in a year, but for the most part, my ingrained pragmatic nature will simply not let me spend $300 on a t-shirt. So like any budget-minded gal, I decided I would simply steal the essence of the look with the help of some things that I already have in my own closet.

And yes, while I could just leave it at that with a reference to imitation being the highest form of flattery, I would be falling a bit short of the mark. Borrowing...okay....stealing looks from a runway show you admire or a street style photo that drew your attention is a great way of expanding your horizons. The greatest benefit of this practice however, is not the replication of the look, but the inspiration that will inevitably spring-up in its wake.  For me, this is what came up, once I had gotten myself well and truly fired-up on the navy and black thing. It is impossible to steal a look with items of your own choosing, and not see something else develop in the process. Go on, I dare you.