A wee digression today from the style side of things. The rain that was predicted last week has become a reality,  and stylish picture-taking out of doors is not an option at this moment in time. So on to pursuits of the indoor variety.

In the spirit of all this back to school hype that you can't get away from this time of year,  HF would like to ease you slowly back into a culture of learning after your last few months of summer pursuits, many of which were likely performed one-handed while holding a gin and tonic in the other, or maybe a Linenkugels and a pair of BBQ tongs (hello, Wisconsin!). No, its time to get serious now, put down the bratwurst, and get back to the learnin'.

Today's post was inspired by a particularly amusing piece by the folks at Yahoo on the all-time worst Scottish accents in film.  Go ahead and hover over that last sentence with your mouse and the link will pop-up, and you can see it for yourself. Go ahead, I'll wait...

As an American in Scotland, this was right up my alley. Movies very rarely get the accent right. Yes, we all expected Mel Gibson's much-publicized revisionist-historian view of the world to produce a bad Scots accent, no surprise there, but with very few exceptions (Mike Meyers being one), nobody else can get it right either. Including me, and I am on what I suppose would be considered the "immersion program".

So to aid you in your journey through the Scots accents and terminology, I have prepared the following module. Pencils-up. There will be a quiz later.

When I was transferring my nursing license to the UK, they made me take a course for foreign nurses (likely meant for non-English speakers, but there I was) in which they made us listen to a tape of things patients might say in a Glasgow Scots accent, followed by a little beep, after which we were expected to write down what was said. No kidding. I believe I made myself a wee bit unpopular by giggling my way through the entire exercise (but I defy anyone to listen to a tape of someone exclaiming "ma heed hurts an I've been spewin'-up all night!.....beeeeeeeep." and not crack a smile). But I digress. Here is the video-assisted part of your module.  Please hold all questions until the end of the session.


Moving on to vocabulary. I can think of no other people on earth that have so many cool words for mundane, run-of-the-mill, everyday things. Here are some key vocabulary words to get you started. Please follow-along at home, and feel free to make notes as you see fit. 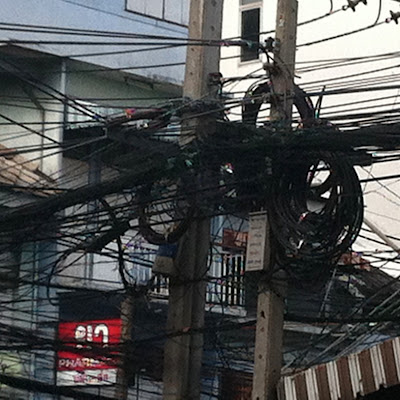 You are now prepared to test your knowledge. Feel free to try to translate the following sentences using your newfound knowledge to replace the words in brackets, Please direct all questions to the comments section below, where a language instructor may or may not be standing-by, depending on if there is something more interesting going on.

1. This weather certainly is (really windy), and it is really getting to be a pain in the (ass).

2. It was an absolute (chaotic, fussy mess) at the cruise ship terminal, and they lost my suitcase, so I had to go to dinner in my shorts, all (skinny legs) and everything!

3. My bracelet got itself in a big (tangled mess) with my jacket, and I ended up shaking hands with the Queen with one hand tucked into my (armpit).