The other day, I was having a wee browse of the internet doing some research on those water deprivation tank things where you can go in and be totally at one with the universe or some such shizzle (it's for some fiction that I am starting this week...don't ask), when I happened was shocked into submission (rare) by the appearance of the HUSH chair in all its glory, in front of me, on my screen. 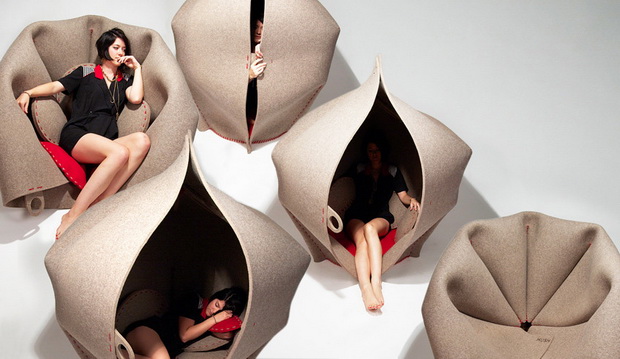 The HUSH chair is the brainchild of very accomplished artist Freyja Sewell. Sewell is an artist in residence at the London Design Museum, and by all accounts is the real deal.  Artists like Sewell are by nature always turning concepts on their heads and existing "outside the lines", so to speak.  Which is how I know that this is not an accident. Nope. Not an incidental finding or an inconvenient and uncanny likeness.

What we have here people, is a full-on vagina chair.

Take a minute here if you need to. I certainly did.

According to Sewell's website, The HUSH chair is designed from a single piece of industrial felt, in order to keep out the hustle and bustle of the world in a wee personal retreat that is meant to be a womblike environment.

This is what the good judges at Project Runway would say is a literal interpretation.  I mean... that taupey, fleshy colour!? Really!?  With the red lining?

Perhaps I'm being too harsh. Lets have another look. 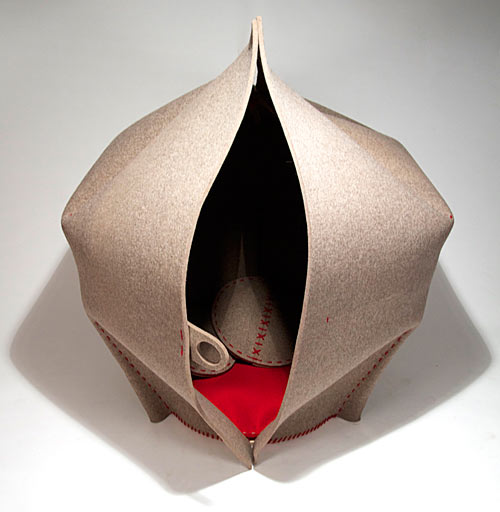 Va-jay-jay. Total coochie couch. Maybe with the flaps down? 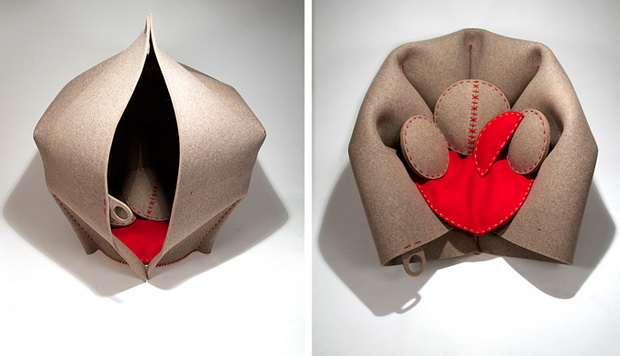 Now I'm in 7th grade health class staring at the giant uterus model, and the teacher is going to come in any minute and tell us to stop giggling (which has never happened, by the way).

Maybe if we just put it away for a minute.

Thing is people, I actually really like the idea. I love the concept of being able to pull my own wee drapes over my own wee world. I just don't want those drapes, and in that colour.  I would like to wave the Georgia O'Keefe wand over this chair and make it into a fun, whimsical colour with maybe, a nice pattern that contrasts, and some plush textures.  At the end of the day ladies, nobody wants to be reminded of her colposcopy by a piece of furniture. Ever.

Lastly, I would like you to  imagine a guy walking into a room full of these. Total Kryptonite for men. It would be like that scene in Aliens where they suddenly realise all of the alien spawn pods are in the bowels of the ship, just lying in various stages of germination, waiting for the hostile takeover of the universe. Imagine this poor guy's horror as he makes this realisation and tries to back slowly and undetectably from the room ...without waking them.....HUSH.
Email Post
Labels: Home Stuff Random Musings