So last week when hubby and I were coming back to the UK from Florida, I was approached by a TSA agent in Tampa airport. I'm sure everyone who has ever breathed oxygen has had some sort of run-in with TSA, the Transportation Security Administration of the Homeland Security Department. As we all know, they generally hang about in airports making sure that all of your seriously deadly 200 ml liquids have been dispensed into the much less-deadly 100 ml bottles, thusly rendering their contents inert. They also do various other security related things which you can read about here, here, and here if you like.

So it was really nothing out of the ordinary when I saw the TSA agent approaching.  I steeled myself, thinking I was in for another spirited debate as to whether or not Pacifica Solid Perfume

is indeed a solid, or explaining that a sachet of Greens Plus vegetable supplement powder

that says "reconstitute with water" on the label is not in fact, a liquid.  But to my surprise, he was smiling. He chatted with my husband for a minute about fishing.  My husband was carrying a fishing rod (sans reel) on the plane, and we were sure that he was going to take it away. Nope, just more smiles (although a little twerp at Gatwick airport security in London did take my husband's rod away later for the one hour British leg of our journey, despite us having already brought it on board over the Atlantic, and despite it being up to the airline whether it is allowed or not, not him....thusly proving once and again that this type of inconsistent douchebaggery is still alive and well in airports).  Ah, but I digress.

No, this guy was still smiling. Then he turned to me, and complemented me on my gray hair, which he stated was the reason he came over to talk to us. He said his wife was starting to get some gray, and it was freaking her out, but that mine looked really nice, and it made me look....wait for it......elegant. 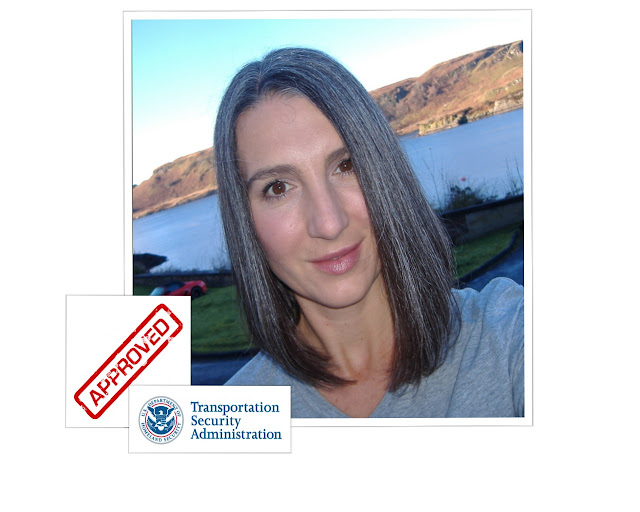 So if you have been thinking about ditching the dye, you have yet another reason to do so. People, this is a Homeland Security approved haircolour.  And while I am under no illusions that the next time I fly there won't be some wee sleekit security guy in Glasgow wanting to separate me from my eyelash curler for reasons that are unclear to both of us, at least I know I have a friend in Tampa. And actually, that has been the way with it. The random complements, I mean. Funny enough, they are usually from men. Who knows, maybe they are used to seeing their wives slave away with hair appointments and bottles of goo in the bathroom...hell, I've been there. But I do get the odd person coming up to me and saying they think it looks cool. And that is....well....cool. Plus....it makes me look elegant.  You heard the man.....elegant.