She Who Dares To Upset My Inner Thrift Store Riot Grrl

Today was a good day in the world of thrift. Today I found this dress in one of the local charity shops.

I have always said that there is no thrift shopping as sweet as the thrift shopping in the United States. I still stand by that statement, today's find notwithstanding. Sometimes I feel like the UK charity shops spend too much time marketing the (mainly) flotsum and jetsum in the shop so that they can justify  putting a bigger price tag on the items. The result of this is that inevitably, they occasionally wander across the fenceline into Ridiculousville.

I saw this dress and knew immediately that it would fit me, and not just because it said size 10 (UK 14) on the tag.  Sometimes you just know, ya know? But look at the tag. Here is how they were "marketing" this dress. 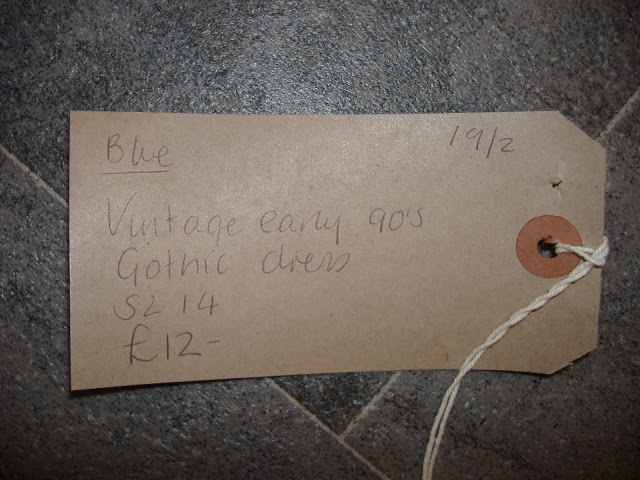 Gothic. Vintage. 90's. No, no, and no.  This is a cotton dress made by British retailer Jigsaw, who are not, nor have they ever been, known for their goth ethos.  Hot Topic they are not. This dress is also nowhere near the nearly twenty years old it would need to be to even qualify as early 90's.  No, my theory is this; this is a dress that was purchased by someone, probably worn once, washed and wrung out and hung dry, and when the person realized how much ironing would go into trying to make it un-wrinkled again, they gave up. Plus, you know how retailers often will use a successful pattern again and again with just a few wee changes when they get a design that works (and by works I mean sells)?

So while I'm not complaining about having to pay twelve pounds for a dress (which is actually a lot by charity shop standards),  this dress is very likely this past season, and therefore I feel completely within my remit to very publicly cry bullshit on this "vintage early 90's" claim.  Not that it kept me from taking it home, mind you.

Besides, I really like the wrinkled texture. It looks intentional (maybe it is), and it keeps the dress from taking itself too seriously. Perfect for travelling, paired with chucks or sandals. Chucks.... actually that is a bit 90's come to think of it.  But goth? Puh-lease.  Here it is with girly shoes. 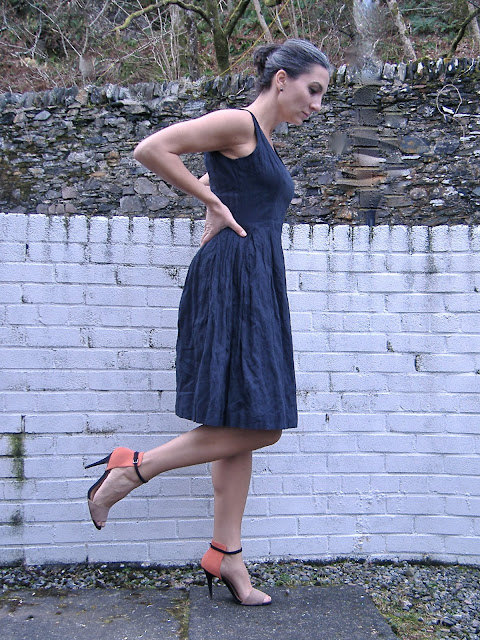 But wait. Here's where it gets good. When I took the dress to the checkout, the clerk sized me up,  looked me up and down, and with a raised eyebrow said sarcastically "like a little of the 90's goth, do you? You'll have to get some Doc Martens and then you'll have the whole 90's goth thing going on."

Honey please.  Stand down before you hurt yourself.  The thrift shop is no place for amateurs, and you are in the presence of a thrift kung-fu master.  The 90's were so very much more than just a bunch of Doc Martens paired with deconstructed babydoll dresses. I get that you think this is a pre-makeover Courtney Love thing you are trying to sell me here, but you are out of your depth.  I was in Seattle in the 90's,  at the epicenter.  I used to see Pearl Jam's Eddie Vedder at the gas station in West Seattle on a regular basis. My roommate used to come home barely able to speak because she stood in line at the Seattle's Best Coffee counter at the QFC next to the bass player from Soundgarden. We used to lie in wait for the moment when one of us might run into Chris Cornell  in the toilet paper aisle on a Sunday afternoon where he would be captivated by our morning-after unwashed hair and ask us to marry him. Hence, I  feel the need to correct you because I believe you are using the term "goth" when I think what you really mean to say is "grunge".  Yes, the word you're looking for...the one you meant to write on that little tag, is grunge, not goth. Not the same. But then, this dress, taken by itself,  is neither of those things. So here is tonight's homework.