It is with a mixture of joy and sadness that I report that this week, the sperm whale that inexplicably swam into the waters directly in front of our house swam back out to sea.  Here is the last shot I got of him, on Easter Sunday. 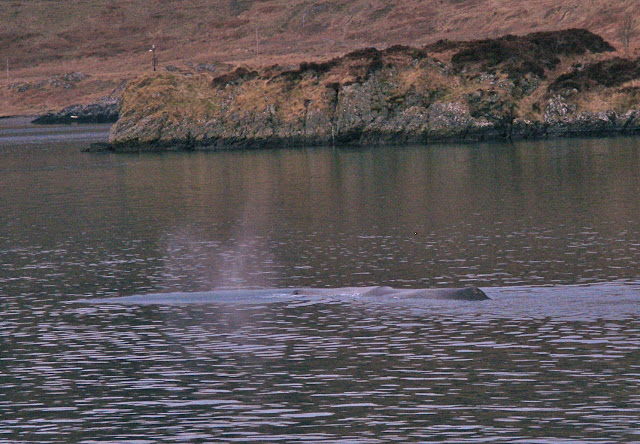 I had originally reported that they thought it was a young whale who was perhaps lost. It turns out he (he was a he) was about 14 years old. After all of the hullabaloo about trying to devise a plan to lure him back out to sea, scientists at the Scottish Association for Marine Science decided that the best course of action was to just leave him alone, as he was showing no signs of illness or trauma. Ferries changed their routes, and people were told to keep a fair distance as to not stress him out, and those who did not listen (mainly kayaks and small boats) were quickly given a stern talking-to by the fisheries commission who would zoom up in a little zodiac. Quite right.

His stay here was largely uneventful (for him), although he did head-butt one of the boats floating on a mooring in the bay and gave himself a slice to the head. Not sure why he did this, but he had evidence of other, older head bumps, so apparently head-butting (or the "Glasgow Kiss" as it's called here) is part of the whale repertoire.

Read the BBC's story about the whale here.

I was sad to see him go, but happy that he made it out in one piece. I was beginning to get attached to the guy, who I could see swimming up and down the bay out my window. You start to feel a little protective of him after a certain amount of time. So to celebrate his departure, I did what so many Americans do....I bought the T-shirt.

And then I found this skirt secondhand. You guys know what a sucker I am for anything with an animal printed on it, and this was like the universe calling-out. Hey, if a little is good, more is better, right? Stay tuned for the whale-themed outfit posts to come.