Having just learned about the upcoming collaboration between H&M and Isabel Marant,  the timing seemed right when Laurren from Farfetch emailed me asking to do a guest post about it. Naturally, I said yes.  Enjoy! 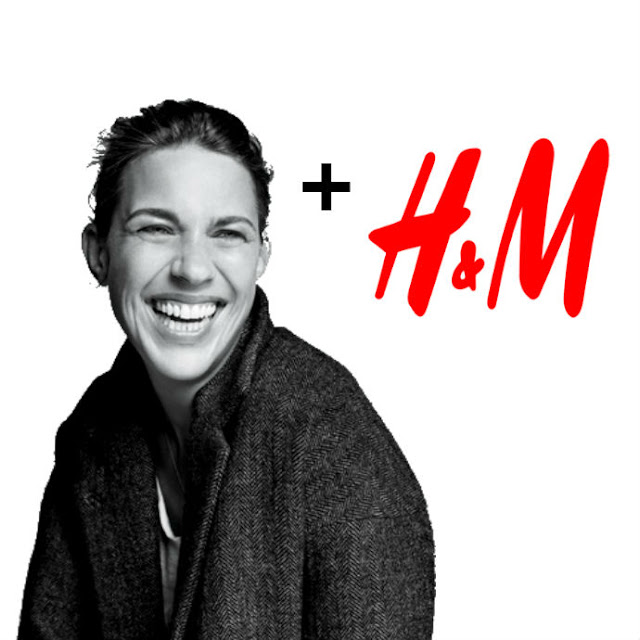 H&M is no Harrods. It may be the go-to store for six packs of ankle socks and cheap cardigans - but it isn’t somewhere you would automatically associate with high-end designer fashion.

But the Swedish chain has been slowly building itself a reputation as an industry connoisseur. Over the past decade the high-street store has collaborated with some of the fashion world’s most celebrated designers, including Karl Lagerfeld, Lanvin, Donatella Versace and Stella McCartney.

This month H&M announced that its newest collaboration will be with Isabel Marant, the quintessentially Parisian designer and queen of laid-back cool. Marant is the woman behind the perfectly dishevelled-chic aesthetic so beloved by models and actresses. All those amazing off-duty models who look like they’ve just rolled out of bed and thrown on the first thing they saw? That’s not down to good luck; it’s down to Isabel Marant.

If you’re not already aware of the designer’s instantly recognisable uniform, you’ll find it regularly featured on any street-style blog worth its salt. It typically comprises skinny jeans, a flatteringly oversized tee and a pair of slouchy ankle boots, maybe with a fringed shoulder bag thrown in for good measure. It’s an ethnic, bohemian mix, without the bells and whistles, which makes it incredibly wearable.

Although details of the impending collaboration have yet to be released, we’re expecting to see the usual mix of peasant blouses, Navajo-inspired patterns, feminine bomber jackets and Marant’s iconic hidden-wedge trainers.

Marant said: ‘I’m flattered by this collaboration. H&M works with the best designers and this invitation is an exciting honour. I aim to create something real, that women want to wear in their everyday lives, with a certain carelessness, which I think is very Parisian: you dress up, but you do not pay too much attention and still look sexy.’

Marant has always been fiercely loyal to her French roots and a perfect example of the je ne sais quoi that makes Parisian women look so effortless. It is clear that she aims to translate this into her new line for H&M. ‘The collection is infused with this kind of [Parisian] easiness and attitude,’ she said. ‘Everything can be mixed following one’s own instincts; my take on fashion is all about personality.’

One thing that has surprised the fashion industry about this pairing is Marant’s outspoken opinions regarding high-street knock-offs of her designs. She spoke to The Telegraph about her frustration over her iconic wedge trainers being copied by high-street stores: ‘Everybody who has the wrong one looks quite bitchy, very vulgar, when mine are not at all.’

But the collaboration makes a lot of sense, too, as previous designer unions with H&M have enjoyed huge success. Marant clearly recognises what a huge global name can do for a high-end brand like hers. Now, instead of cheap knock-offs, Marant will have control over the end result. Although the prices are guaranteed to be a little steeper than usual for H&M, the final product will be much better quality and more luxe.

Margareta Van Den Bosch, the creative advisor at H&M, told Vogue.com: ‘We are excited to have Isabel Marant as a guest designer for H&M. The way she mixes different elements in her collections, creating a style that is effortless and urban, makes her very contemporary. She has a fantastic eye for ethnic detail and the rare ability to create something that people really want to wear.’

In the past decade the company has worked with some of the most influential and exciting designers in the industry. We take a look back over H&M’s fashion liaisons:

March 2007 – H&M collaborates with Madonna on a collection with a strong workwear aesthetic that includes a lot of monochrome, pencil skirts and parkas.

May 2007 – Kylie Minogue launches a swimwear line with H&M with printed kaftans and metallic one-pieces.

November 2010 – Alber Elbaz, the artistic director at Lanvin, launches a range at H&M that includes everything from cosmetics to coats with prices ranging from £7.99 to £199.99.

November 2011 – Donatella Versace’s collection includes the luxury brand’s iconic clash of animal and oriental prints and bold use of colours.

December 2011  - In one of the lesser known collaborations, H&M partners with Trish Summerville, the costume designer on The Girl With The Dragon Tattoo, on a dark collection featuring leather and studs.

March 2012  - Marni debuts its H&M collection with a wealth of feminine prints and cuts and a collection of bold accessories.

October 2012 -  Anna Dello Russo, the Editor-at-large for Vogue Japan, launches an outrageous collection of accessories, including everything from bracelets to clutches.

November 2012  - The directional and avant-garde label Maison Martin Margiela launches a collection of oversized coats and Perspex heels. The collection is well received by fashion connoisseurs, if not the general public.

Even following in the footsteps of some of the biggest names in the industry, the collaboration with Isabel Marant is one of H&M’s most anticipated partnerships yet and will doubtless delight fashion lovers across the world.

This guest post was written by Lucinda Bounsall at Farfetch.com