The Real Axis of Evil

I’m not entirely sure what brought this on, but this week I have been thinking a lot about the Epilady leg shaver. I know. Weird, right?  But you remember the Epilady, don’t you? And no, I’m not talking about the various and sundry new varieties of Epilady. No,  I mean the very first one. The old school one. This one. 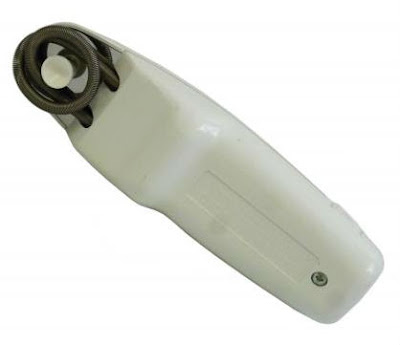 ﻿
In or around 1986 when the Epilady first appeared on the market, we got one. When I say we, I mean the women in my family. I used it once, as did my sister, and then my mother. We each used it once. Just once.

Because the Epilady hurt like a bastard, that's why.

The CIA is really missing a trick, what with its black hoods, waterboarding, and sleep deprivation. All you really need to do to interrogate a group of suspected terrorists is to pass around a basket of Epiladys and tell everyone to go back to their cells and don’t come out they have baby-smooth legs. You would have the name, address, and blood type of every suspected terrorist in the world in about four minutes. Job done. World peace.  I mean, look at the thing for chrissakes. 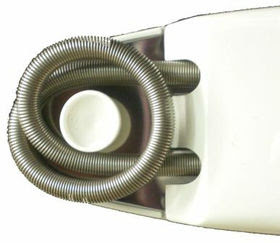 That evil eye staring back at you like the white-hot center of Hades is the epicentre of an evil rotating spring metal coil. That my friends, is the real Axis of Evil. The coil would catch the hair and rip it out by its roots…by its roots, thereby delivering the promise of smooth, hairless legs for weeks on end. Like with wax, you were supposed to have at least a quarter-inch of growth on your legs (gah!) before using it. Supposedly this gave the evil coil something substantial to hold on to, making it easier for it to grab hold of your soul with its cold, vicelike grip and tear it out through the hair follicles of your legs.


My Dad still jokes about sitting downstairs in our old house and listening to our blood-curdling screams as each of us, in turn, persevered with the thing, placing our vanity well ahead of our epidermal integrity. The result? Well...for me, all I ever managed to achieve was chicken skin. 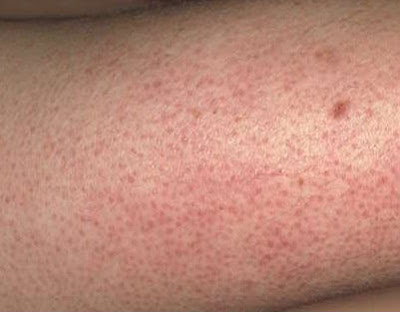 Okay, so this is not an actual photo of my legs, thank God. This is technically a photo of a condition called  keratosis pilaris, but it is a nearly exact likeness of what my legs looked like for days after my date with the Axis of Evil. To add insult to injury, I had a pool party to go to the day after I used the Epilady. I was a teenager at the time, so you can imagine how that went down. There is nothing so scarring as having to endure the worried looks of fellow swimmers as they mentally calculate a safe swimming perimeter from your infectious looking chicken skin legs.

Years later, I was working on a major cruise line. My roommate, a fellow cruise staff member from Holland, had been a supermodel in the 80s. And I’m not just saying that. She was a no-shit supermodel who had the same hooded Aläia dress that Grace Jones had because…get this... Aläia let them keep his dresses after the show. I know, right!? She had stories about Bowie and Iman and had been in a bunch of films. All the ship's officers went into some sort of seizure state when she walked into a room.  She was also a wonderful person, full of life experience and wisdom and good energy and advice. She was the perfect roommate in a profession where such a thing rarely existed, and I worshipped her. So you can imagine my horror when one day I flung-open the door to our shared crew cabin and found her perched on the edge of the only chair using the Epilady. She was just, using it. Using it in that sort of detached, languid way that you see in the women in body lotion commercials, where you just want to shake them from their trances and yell “what are you doing!? You’re not even really rubbing that in!”

I stood there transfixed. I wanted to run to her, rip her from the jaws of the beast and throw the thing on the ground and stomp on it, thereby saving my roommate in a true act of heroism.  But I didn't. I just stared.

When I was finally able to speak well enough to register my concern with my roommate, she just threw back her beautiful head and laughed, still running the evil tool over her legs without missing a beat. Then she declared her undying love for the thing, saying that she would never dream of using anything else to shave her legs. My twenty-something year old self justified this by deciding that I just wasn't sophisticated and European enough to be able to take the pain. I was a girl from Wisconsin after all, and I used a Bic for men that I would fish out of the yellow plastic valu-pak when the old one was no longer sharp enough to make my knees bleed in the shower. For a brief moment, I even thought about trying the Epilady again. It was a very brief moment.

But as it turns out,  there are many others like my roommate out there, because I checked, and they still make the thing! Not only do they have a whole new line of (probably infinitely more tolerable) Epilady products,  they still make the original.

The Axis of Evil is still in production.

Weapons of mass destruction are real, and they are right now, at this very moment,  being marketed to you under the name Epilady Classic. 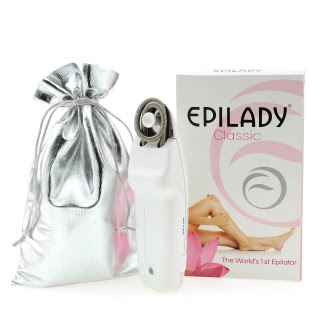