In 2002, I was a saxophonist in The Air Force Band. We did a Bob Hope tribute concert at The National Museum of the Air Force (which is awesome, by the way), in which Phyllis Diller herself was the main attraction. I was giddy with anticipation for the gig, and Ms. Diller did not disappoint.

Well into the upper reaches of her 80s, she showed up for her set wearing a version of her iconic "Omar of Omaha" ensemble (complete with crazy hair and green stiletto booties). The announcer kicked-off the show by introducing her as "the Madonna of comedy", and she took the stage, reassuring the audience that though she may be the Madonna of comedy, they needn't worry, because the only circumstance in which she would grab her crotch was if it were falling off.

Yep. She went in with the crotch joke first.

Needless to say, that was not the standard fare for an Air Force gig, and I was practically levitating off of my seat with the joy of finally getting to play an Air Force show with a little edge to it; delivered in an 85 year-old package, no less. She was razor-sharp, lightning-fast, and thoroughly professional. She moved through her set seamlessly, and you knew that you were in the presence of someone who knew exactly what she was doing.

Raise a glass tonight to Phyllis Diller; feminist, pioneer, queen of the one-liners, and wearer of big, electrocuted hair. The world lost a unique comic talent this week, and we'll miss her. 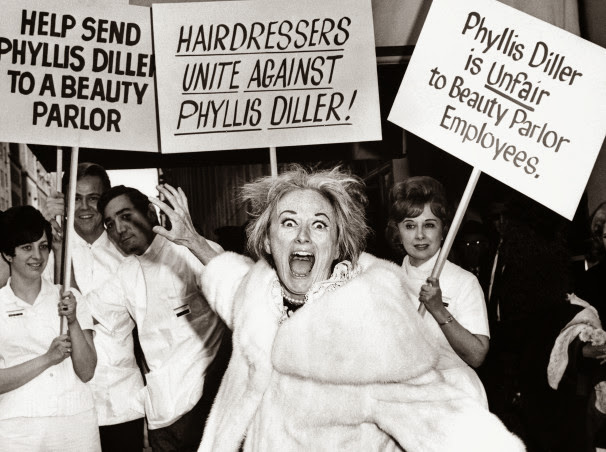 "You know you're old when someone compliments you on your alligator shoes, and you're barefoot."


"A bachelor is a guy who never made the same mistake once."


"There's a medical crisis. Doctors are reporting that many men are having allergic reactions to latex condoms. They say they cause severe swelling. So what's the problem? "


"Whatever you may look like, marry a man your own age - as your beauty fades, so will his eyesight."


"I do dinner in three phases: serve the food, clear the table, bury the dead."