As an expat, I always follow the rolling-out of the Olympic uniforms with great interest. Maybe because I'm a little sensitive about my beloved country's often-overblown caricatures that are so often portrayed as the "average American" in the world media. Whatever the reason,  you can imagine my disappointment when this came across the screen of my laptop.

Historically, I've always liked Ralph Lauren's sporting uniform designs; his preppy aesthetic generally melds quite well with the bright colours and bold patterns that are synonymous with sport. His work with the U.S. Open was has always been a hit, and his 2012 opening ceremony uniforms reminded me of a chic, well-fitting minimalistic version of my old Air Force uniform. In a good way.

I even see what he was going for with this. A sort of Aspen, aprés-ski, casual "around the village" kind of a vibe.  I just wish it didn't look so much like something you might find at Walmart on the Crazy Cat Lady Festive Christmas Sweater rack. Yes, he sourced his materials and had everything made in the USA this time, but the finished product hardly does that effort justice.

Nice pea coats though.  I'll give him that. That's more like the Ralph Lauren that we know and love. I'd totally wear that. 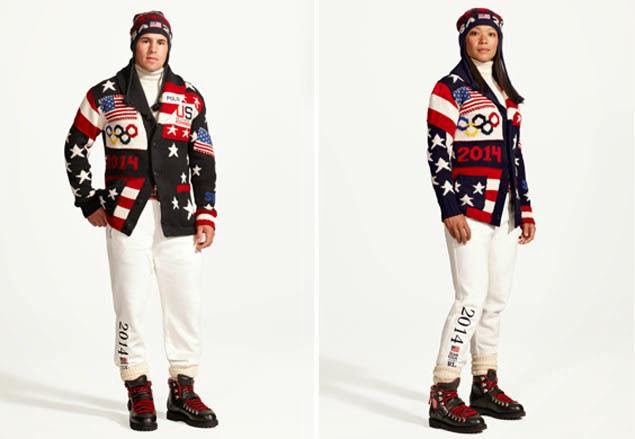 I suppose Olympic uniforms are always a bit on the wild side. They are supposed to be a celebration of one's nationality, and therefore tend to lean rather heavily on references to national dress, with an added element of whimsy, and (often spurious) efforts at utilising modern cuts and materials. But sometimes, they're just downright fugly.

If you're looking to feel better, there is a spot of schadenfreude to be had here. Although ours might have garnered the most negative publicity to date, we Yanks can rest assured that we are not the only ones who will be galavanting around in something tacky in 2014. Have a look.

These snazzy uniforms will distract you just long enough to not question why the hell you're watching curling. Is it wrong to admit that I kind of love this?

And then there are the Canadians, making a nice quiet and polite statement. The lettering on the sweaters looks like it was printed with an old dot matrix printer circa 1987.  It conjures images of the old Pac Man, which I think would make a nice graphic addition to the front of the sweater. Nice touk though, eh?

Germany has decided on the gay pride look this year. Good for you Germany! In your face Vladimir Putin! Last week Putin was quoted in the Washington Post as saying that "gays have nothing to fear at the Winter Olympics as long as they leave children alone". If it hasn't happened already, will someone please explain the difference between a gay person and a pedophile to this poor confused man? I have to work tonight and just don't have the energy right now.