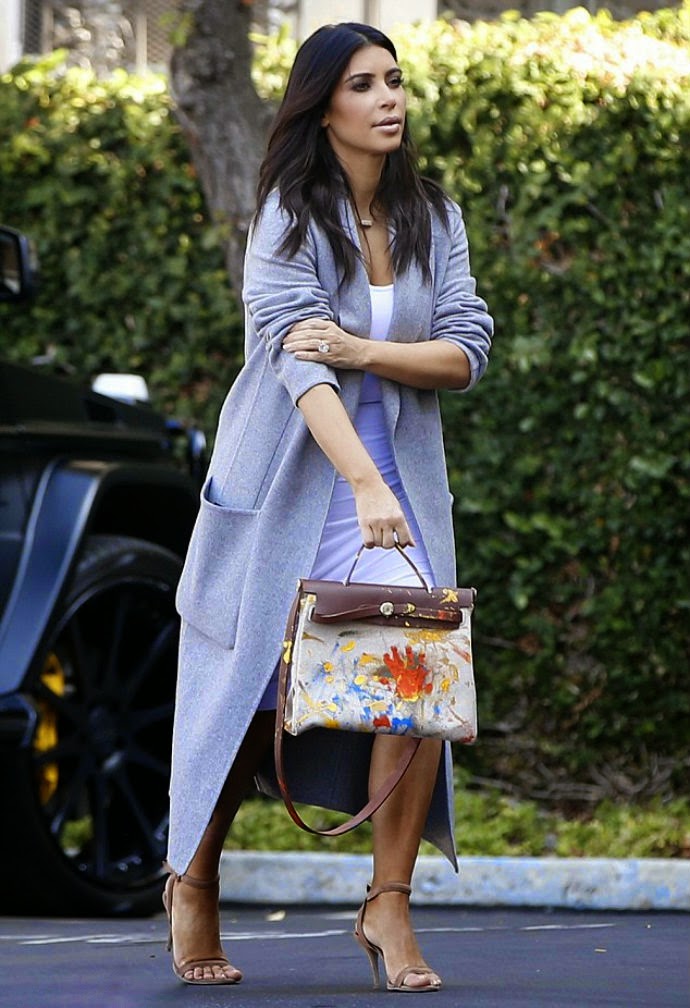 Welcome to Saturday peeps, where we (sometimes, when I feel like it) discuss sartorial events in the context of pop culture. Today, as much as it pains me to give any more air time to The Kimye Corporation™, I was left thinking about this particular sartorial choice for longer than I care to admit after seeing it over at Celebitchy earlier in the week.  If you are not familiar with Celebitchy, it stands a visit. Gossip items written, read, and commented-on by smart women (and some men) with real lives and jobs and a pretty large helping of advanced degrees. Read the comments, enjoy the witty repartee, and enter the debate about who's hotter, Cumberbatch or Hiddleston (Team Hiddleston).  It's good fun. The first time I visited the site, I felt that I had finally found my people.

This is an Hermès bag that Kanye presented to Kim K, upon which he had their daughter make some artful "modifications". Although the original story wrongly identified this bag as a Birkin worth anywhere from $11,000 on up, it is actually the much lower-priced canvas and leather Hermès Herbag, which is a relative bargain coming in at just under $2,500. But that's not the point.

I guess I'm of two minds here.  There's my live and let live side, which firmly believes that people should be allowed to spend their money any way they see fit, and the rest of us should just keep our noses out of it. But there is also the pragmatic midwesterner in me, who looks at a bag worth more than the monthly salary of most of the occupants of the small town I live in, and thinks that really, this is a way to sort of signal to the world that you have so much money that you can afford to let your one year-old paint all over a $2,500 handbag; that this is not just an attempt at sentimentality, but rather some sort of attempt to reinforce social stratification. That part of me feels like this kind of thing is right out of the Thurston Howell III playbook, or perhaps Sacha Baron Cohen as the Dictator Admiral General Aladeen using paper currency to wipe his bum after using his (solid gold) toilet.

Don't get me wrong, I see what Kanye was supposedly going for here. He has given Kim an art-customised Hermès bag before, so this is not exactly new territory. Also, Angelina Jolie had the fabric of her wedding veil adorned with drawings her children created and started a bit of a trend in the process, so Kanye, creative genius that he is, probably took at least some of his inspiration from that. But does it matter if your one year-old paints on a $2,500 handbag versus a $40 canvas tote?

Also, I wish she wouldn't have gotten paint on the leather bits. That's just sloppy. Kids these days.