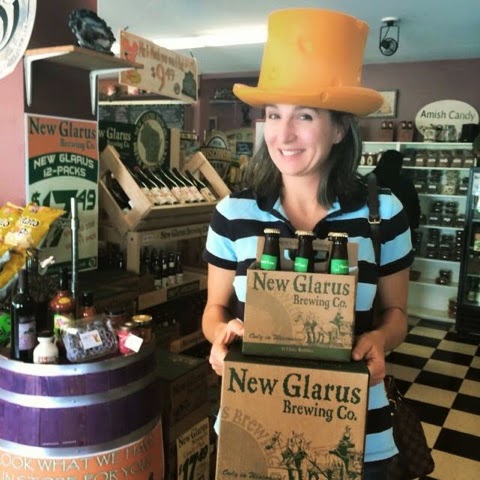 Greetings internet dwellers! My apologies for the slight delay in programming, I am just picking-up the pieces from my recent trip back home to America's cheese and beer capitol. An interesting sartorial note; they now make the traditional Wisconsin cheesehead wedge hat in a top hat version! It's about time. Those of us who know fashion know that there are times when a wedge is just not appropriate.

On a different note, this visit, I went with my sister to one of our home state's biggest attractions - The House on the Rock. Even though we were born and raised in Wisconsin, we had never had the occasion to go there, so we decided to make an afternoon of it. It is the understatement of the century to say that we were not prepared for what we saw. I may very well have nightmares for the rest of my days due to some of the creeptacular things we witnessed at The House on the Rock, and I hasten to add here that we got there late, and didn't even have time to see the whole thing.

The history of The House on the Rock is sort of up for grabs on the Internet, but Wikipedia does a pretty good job of representing all of the theories floating around out there. Built by eccentric bajillionaire Alex Jordan Jr., the truth about its inspiration is probably never going to be fully understood, but one theory (and the one that I believe over all others) is that its entire existence is likely owed to two things: 1.) Jordan was an unrepentant collector obtainer of all things weird or otherwise (and when he couldn't obtain an original piece he apparently just made a reproduction in his workshop), and 2.) that the house was probably meant to piss-off Frank Lloyd Wright, whose legendary home and school Taliesin are very close by, and whose influence is undeniable in Jordan's work. Wright's original Taliesin burned-down when a disgruntled employee set fire to it and murdered 6 people...he rebuilt it (but I digress...that's another great tale for another time). Both of these houses are located within a stone's throw of each other in Spring Green, Wisconsin, and both are open to the public to this day.

The House on the a Rock is built on the very tip top of a cliff face called Deer Shelter Rock. Apparently Jordan liked to picnic there back in the day. Like his alleged idol/rival (depending on what you read) Frank Lloyd Wright, the house is heavily influenced by Japanese architecture and the natural environment. House on the Rock is like a sort-of charicature of Taliesin; a grotesque and less-precisely-aligned version that could be Wright's house reflected back in a fun house mirror. However, there is one element of House on the Rock that cannot help but impress. A very long, narrow "room" (it's more of a walkway, really) called the Infinity Room juts out from the house, extending 218 feet out from the precipice of the cliff, and 156 feet above the forest ground below, all with no visible supporting beams underneath the structure. 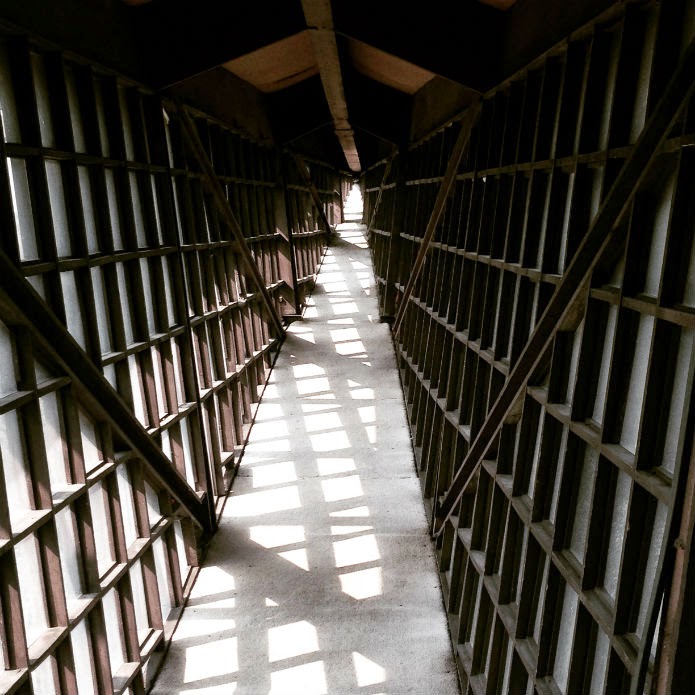 But that is probably where the architectural wonderment begins and ends at House on the Rock. Unlike Wright's Taliesin (a house you could easily see yourself living in) the House on the Rock is more of a vessel for the former owner's hoard...collections, and is as dark and foreboding as Wright's designs are timeless and light-filled. In fact, it was impossible for me to imagine spending more time in there than had already elapsed three minutes into the tour. The rooms are dark, often lit by tiny cracks of what little natural light is allowed-in from the bits of the house that have settled, and that little light is augmented by red indirect lighting. Yes, red, for extra creepiness. Apparently that's how Jordan liked it. 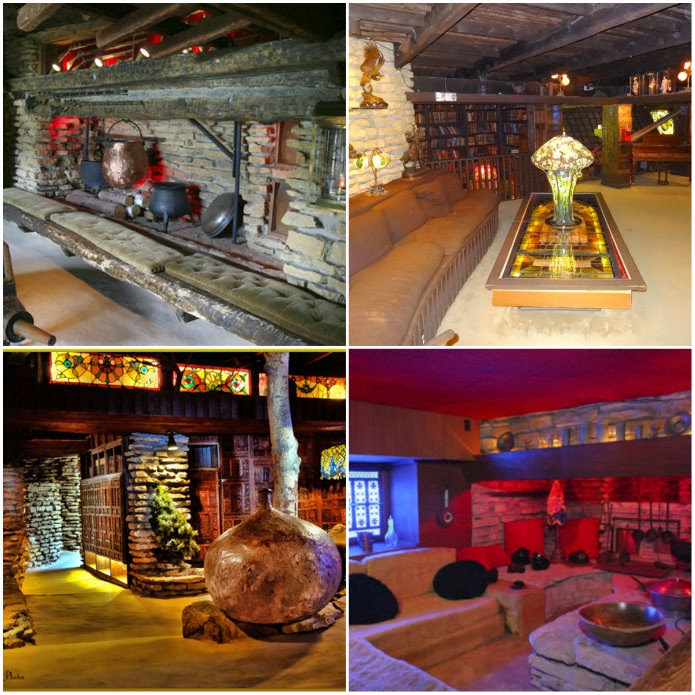 The "collections" themselves are a sort of hodgepodge of artefacts cramped together in inexplicable arrangements, and there is an overwhelming smell of such a strong combination of damp, rodent pee, and whatever spray they used to try to get rid of said damp and rodent pee that my sister and I literally ran, giddy with hypoxia through the first part of the exhibit, relishing the little break you get on one of the outdoor terraces way more than one should only fifteen minutes into a tour. Upon returning to the inside of the house, we were met with old books in poor condition that line the cavern-like walls and extend up three three flights of stairs. It's impossible to know which items are genuine collected artefacts and which are the reproductions that Jordan was known for, because nothing is labelled; there are no writeups about any of the artefacts, leading one to believe that more of it is probably created than collected. Items ranging from faux Tiffany lamps and Faberge eggs to gnomes, Buddhas, and statues of Jesus that stare out at you from every corner are all at your disposal. There is thick carpet, yes...carpet on most of the floors that gives the whole place a haunted 70's evil shag pad vibe (and likely accounts for much of the smell), yet it somehow makes the place seem less inhabitable and cozy than if they had just left the bare stone floors exposed. It's like at any moment, Austin Powers' evil doppelgänger will materialise in front of you in an ascot and smoking jacket and offer you a spiked drink from a poison chalice. I don't scare easily, but I have never been in a space that left me feeling as unsettled as this one. Ever. And that is exactly why my sister and I can't wait to go back and see the whole thing. 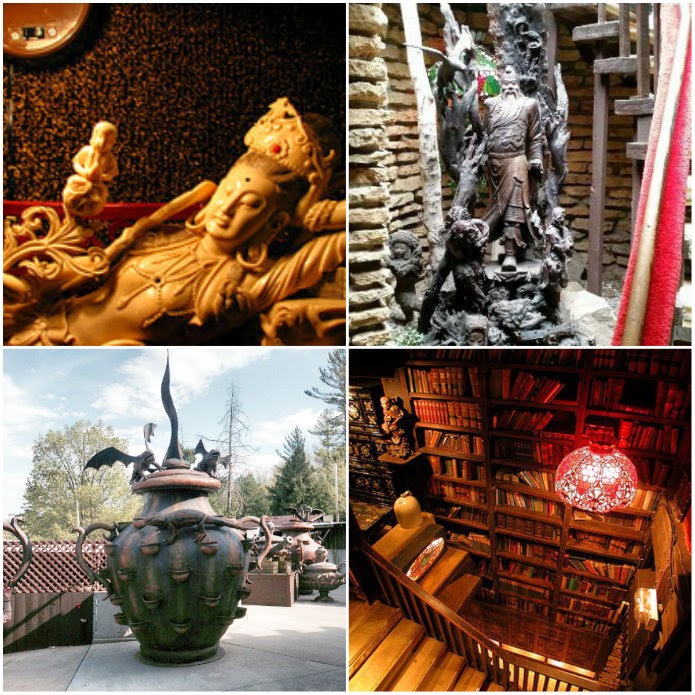 What's even more enticing (or repellent, if you're not freaks like us), is the fact that there was a lot that we didn't see that day. Rooms full of musical instruments that play themselves. Creepy dioramas with mannequins. "The World's Largest Carousel" made-up completely of plastic baby dolls and floating mannequins, and a stories-high sea monster, just to name a few. These attractions were all added later-on, after the initial house was built and opened to the public (when Jordan realised that people would pay to see this stuff) back in 1959. 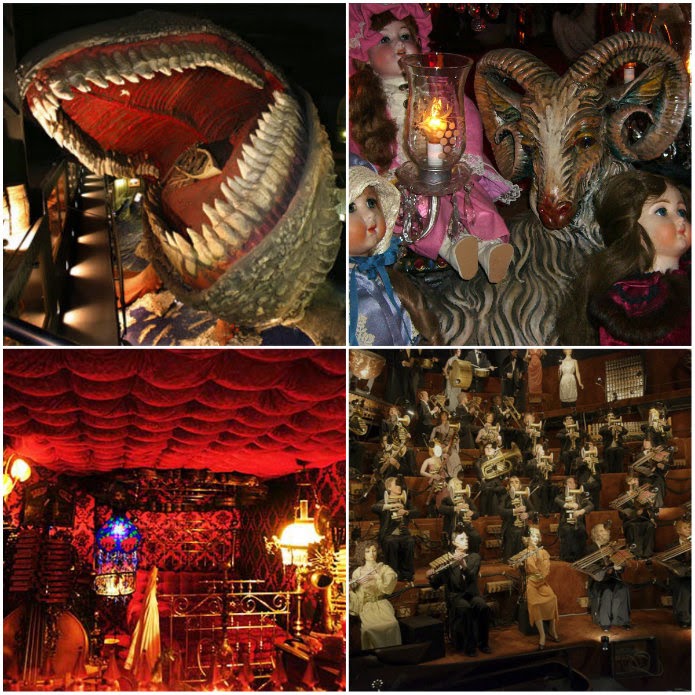 If you want an educational day out to see a historical part of American architectural heritage, give House on the Rock a miss and head straight for Taliesin, which is superior architecturally, aesthetically, and most likely olfactorally (is that a word?). However, if you're looking for a fun day out in some beautiful country, and are the type that likes a good freak-out, then you simply must visit The House on the Rock. Seriously, this place is off the hook. Just give yourself some time to recover. My suggestion is the New Glarus Spotted Cow Farmhouse Ale, sold only in Wisconsin. That fixed us right up. 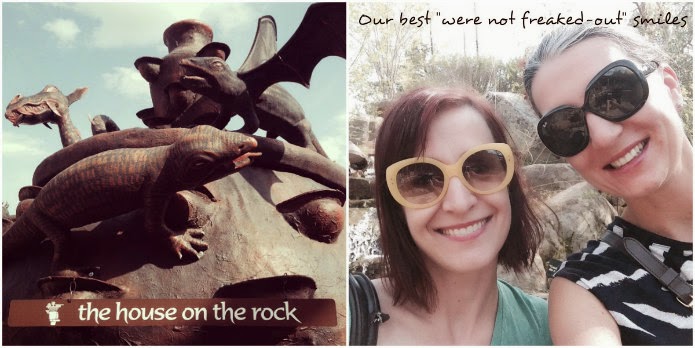