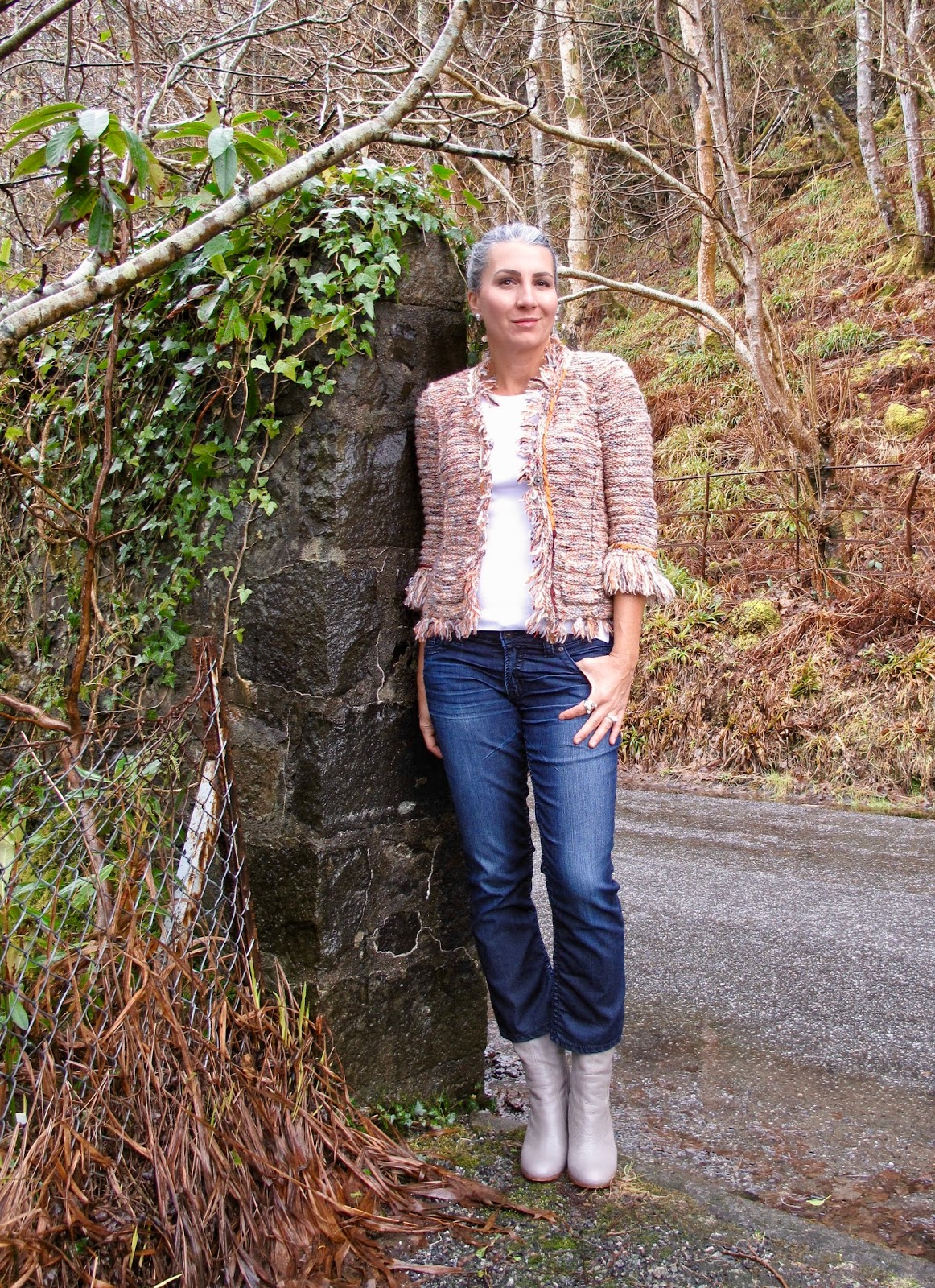 This time of year is problematic. The weather is still terrible, people are sick, and there is just a general sense of being "over it" amongst the general population. A friend of mine just posted on Facebook that they got another massive dump of snow in New England, and I practically felt sympathetic chest pains for her plight. At this point, we don't want it. The magical twinkly holiday part of the season is over, and has given way to the gritty leftover show that's full of dirt and keeps you having to vacuum and rinse the dog off daily. Here, it has been raining constantly. Big surprise. It's even raining in this photo - or about to. That smirk on my face? That's one of the best shots I could get, such was the extent of my contempt for this winter of our discontent.  I was literally grimacing, bracing against the weather, in every shot. Believe it or not, these were the "keepers".

This time of year, we need fashion more than ever. However, I imagine many of you, like me, are trying to put a tourniquet on the hemorrhaging of cash that seems to have happened during the holidays, so that's why today I decided to do a fully-thrifted look. Okay, except the shoes. I bought them new. But they're boots, and boots are like, forever shoes, so they don't count.....

This top looks like a bouclé jacket, but it's actually a cardigan, and as such is really comfortable while still lending that kind of Chanel-y vibe. The jeans were my attempt at wanting to try the cropped kick flare trend with boots, but then realized that I didn't actually like cropped kick flares (never did), and went for a pair of straight ones instead. On me that's much better. But hey, you guys can do you.  The underlayer is a thin silk blend sweater tank that goes with EVERYTHING and as proof of its usefulness, is also the one I am also wearing in my last post.

All things told, I can say with relative assurance that this entire look (minus the jewellery) comes in well under $100.  No, it may not mean I can afford to fly first class the next time I travel, but it's something. And this time of the year, we need something. 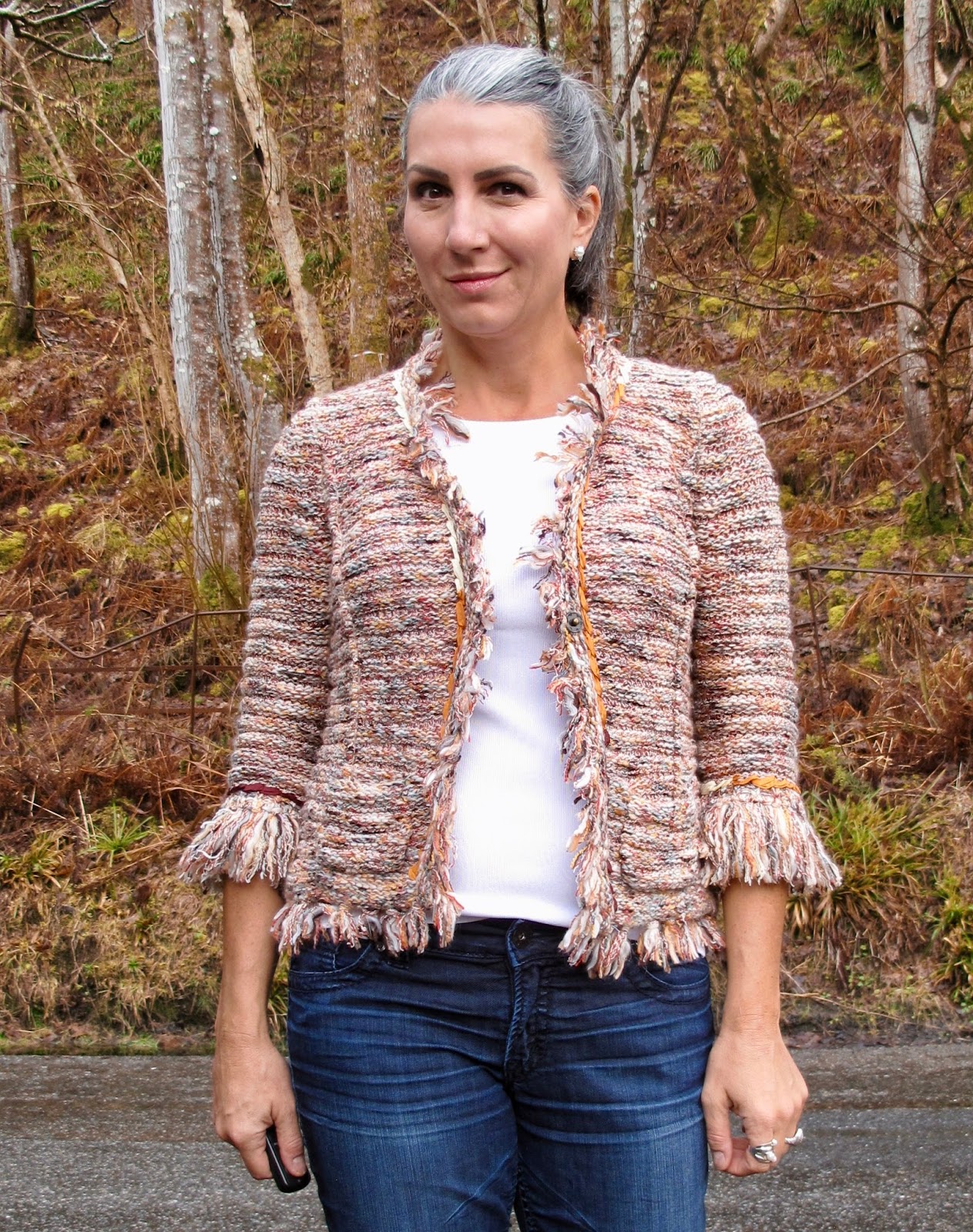 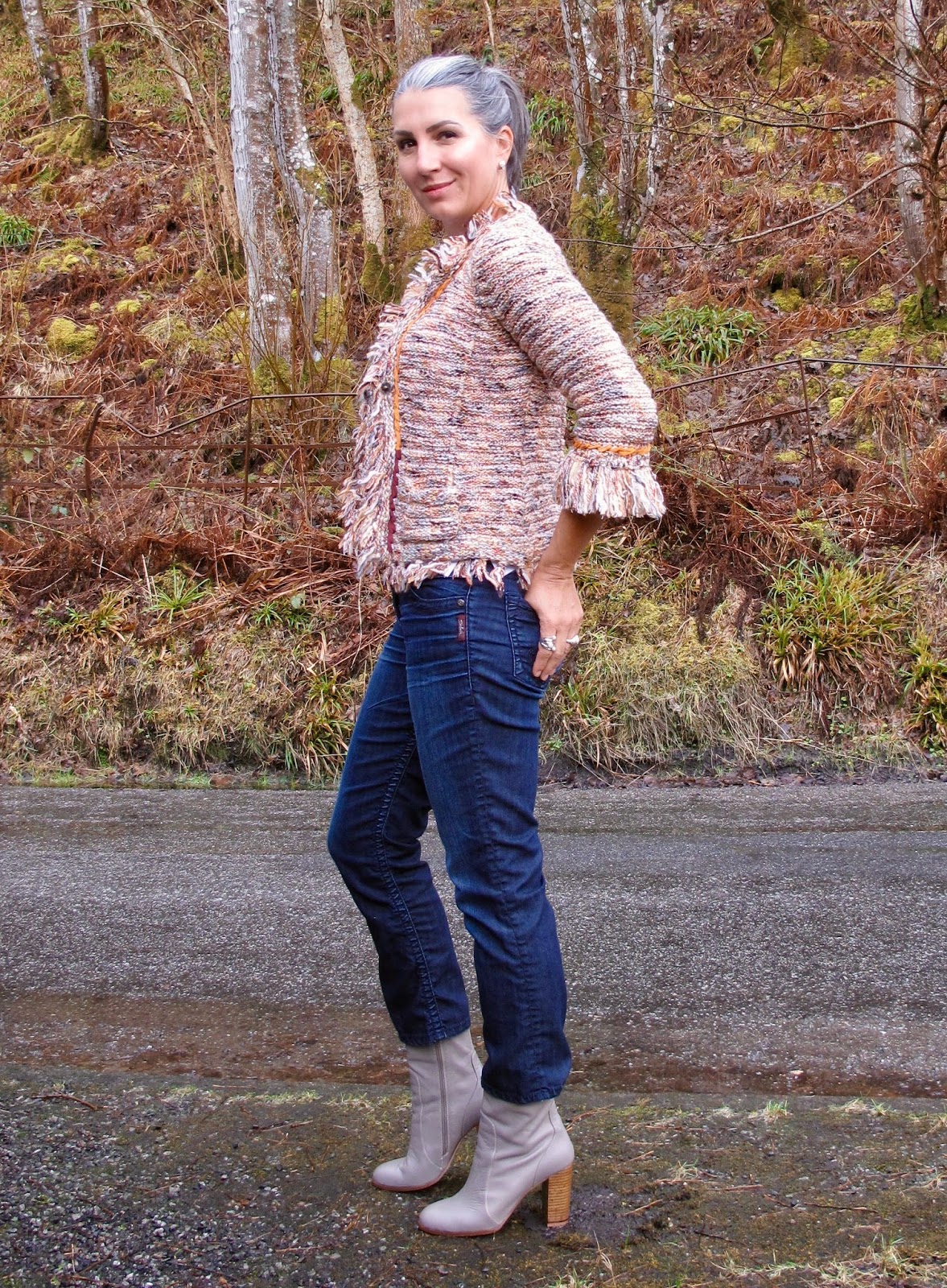 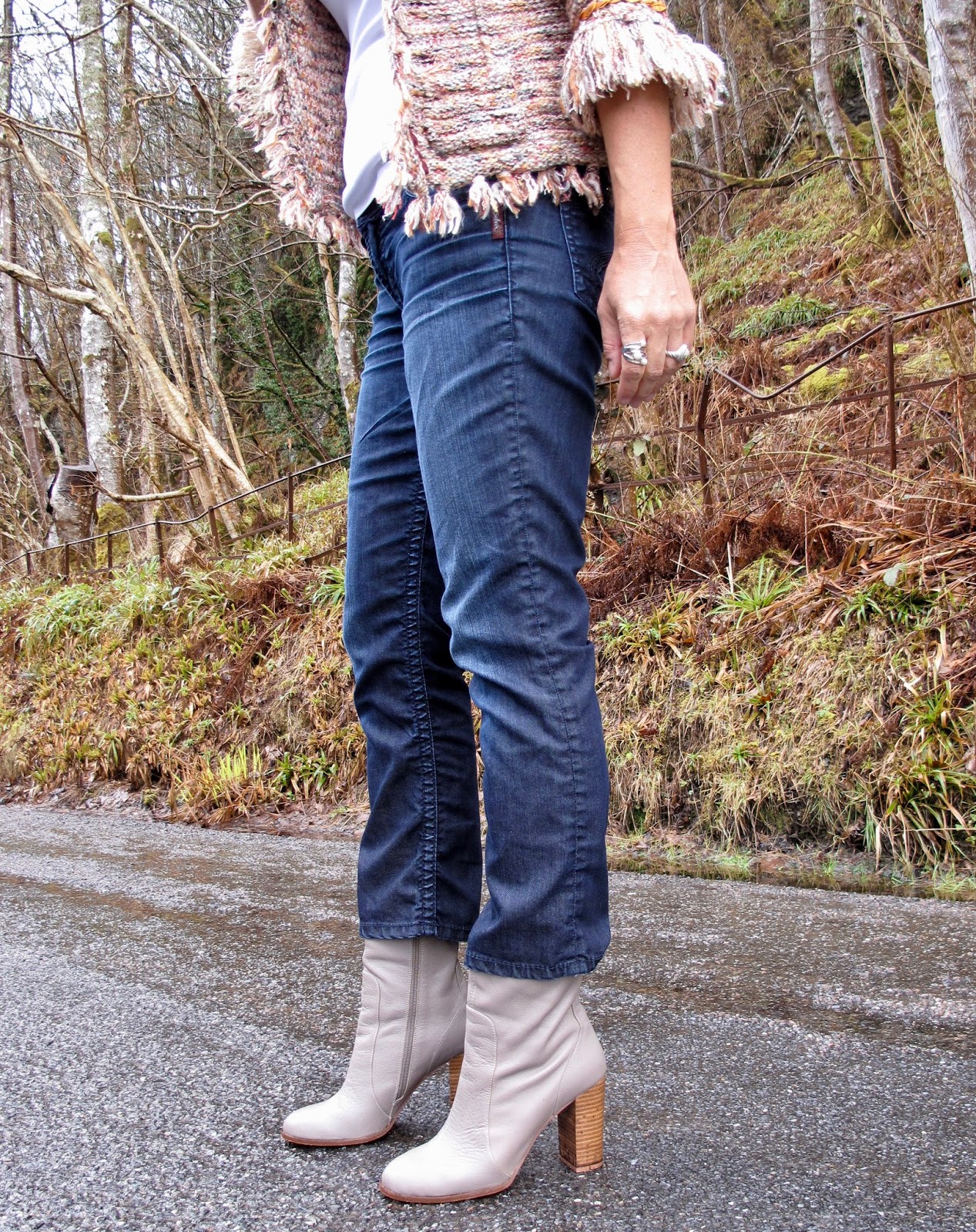 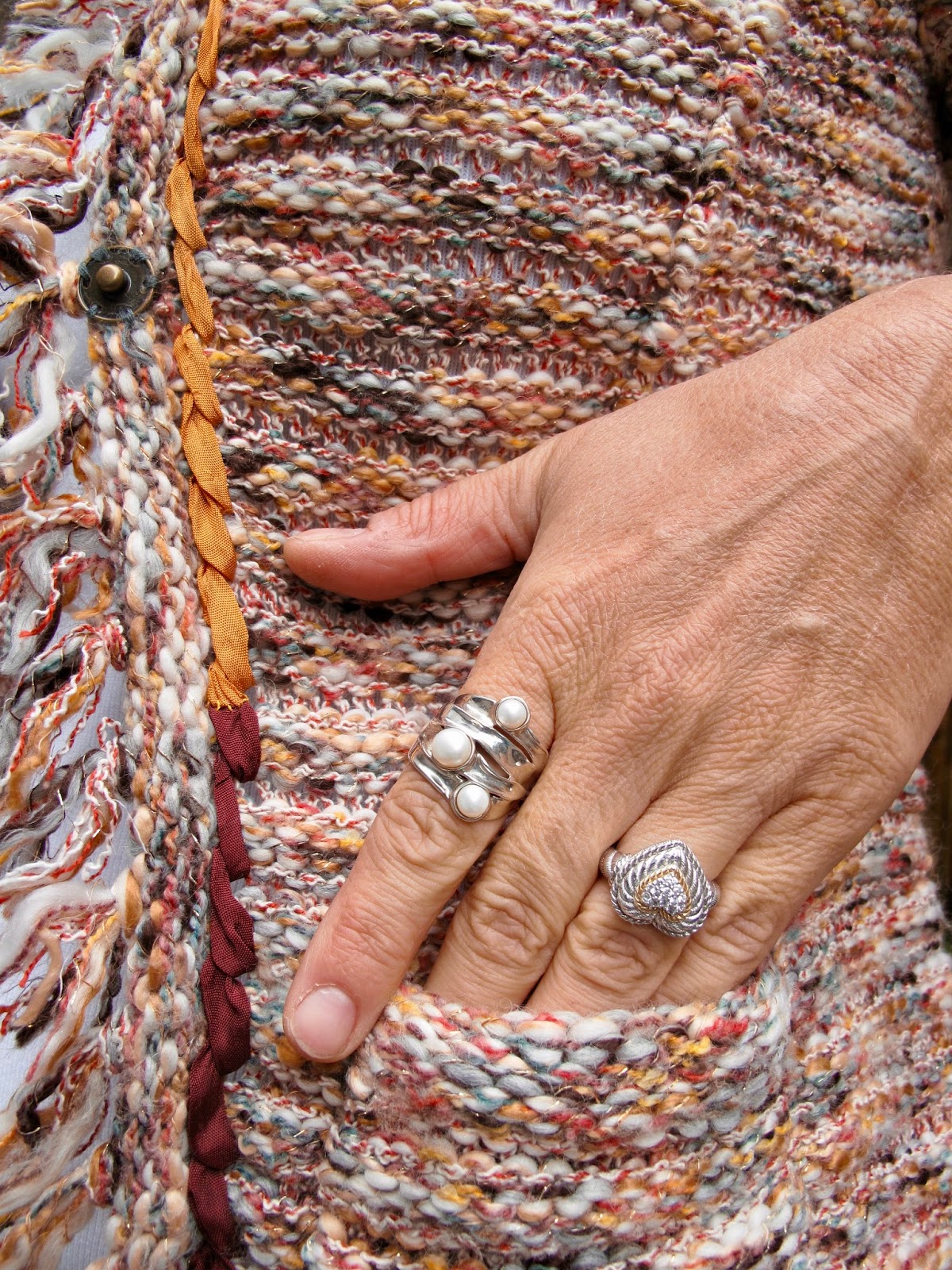 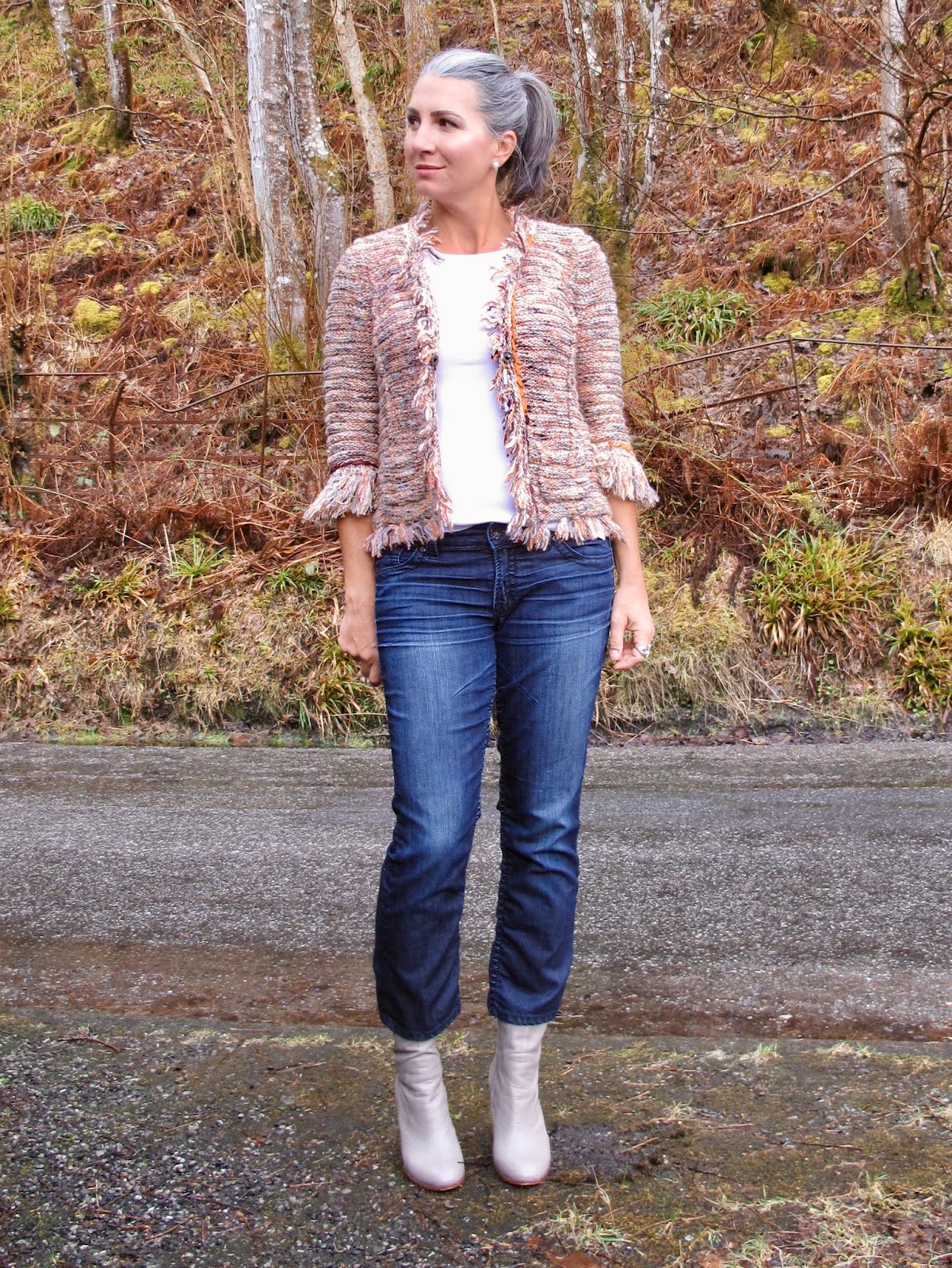